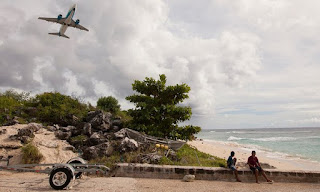 A Somali refugee is on life support in a Brisbane hospital after she and her newborn son were medically evacuated from Nauru in a critical condition.
The Refugee Action Collective said the 22-year-old woman, Naima Ahmed, and her baby boy were flown in separate planes.
Ian Rintoul from the advocacy group said Naima was 32 weeks' pregnant when she underwent a caesarean operation on Nauru on Thursday.
The baby was born one month premature.

Mr Rintoul said an air ambulance transported Naima to Brisbane and a plane carrying the baby left Nauru three hours after his mother.
Doctors for Refugees' Dr Barri Phatarfod said if Naima died it would be the Department of Immigration's fault.
"Without a doubt the Immigration Department has put the life of this woman and any other pregnant woman in significant danger by making them have their deliveries in Nauru," she said.
"It is an absolutely horrible situation. The mother is gravely ill and she is a young mum, she is 22, at the perfectly healthy age for a woman to give birth.
"If she dies it is as a direct result of the Government's policies that force these women to give birth on Nauru.


"This is the third case we have seen coming out of Nauru where there has been either a tragic outcome or an incredibly distressing outcome."
"Ever since the Government stopped routinely bringing pregnant women from Nauru to Australia to have their delivery, something like this was bound to happen," she said.
"We only know that something didn't go to plan, she's now in a critical condition, she was intubated... and we don't know how likely the baby is going to recover either."
Dr Phatarfod said Naima suffered from the high blood-pressure condition, pre-eclampsia.
"She apparently had a seizure on Nauru at five months," Dr Phatarfod said.
"She should have been [medical evacuated] out at that point."
Mr Rintoul said both were considered to be in a critical condition when they left Nauru.

"This emergency medical evacuation raises even more questions about the standard of health care on Nauru," he said.
"The Minister needs to come clean on the real standards of the Nauru hospital."
A spokesperson from Australian Border Force said the mother and child were receiving appropriate medical treatment.