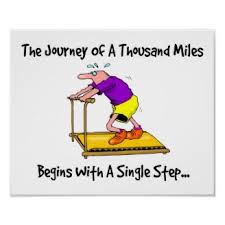 Got up today around 6am and headed for the gym...I didn't get a good night rest and I feel so tired...Plus after my workout yesterday..I got home and had toast, bacon and eggs and for lunch I ordered Pizza...Dinner was light...Oatmeal and Eggs....Geez...I think i put back more calories than i lost during my 30mins workout...!!!!

I have to be more disciplined and eat healthy meals..Perhaps I will google some healthy eating options...

Today I spent 20mins on the treadmill and 10mins on bike..I am going to try for an hour tomorrow...The crazy thing is that I used to be really good at this...Hmmm..
Got home in time to get a quick shower before running out to work..No breakfast.figured I could eat more in the afternoon to makeup for breakfast...or maybe not...I need to get serious with this weight loss plan...:-)