Sally's Story of An Ectopic Pregnancy 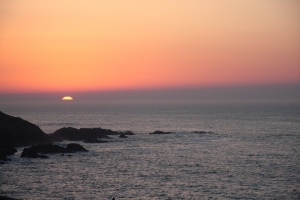 I had just returned from a funeral of a close family friend and had been particularly busy. I got up in the morning and was going to work as normal. While driving I began to suffer some cramping. My period was due so I put it down to that. I got to work and felt nauseas and dizzy so went to the bathroom where I was sick. My first thought was food poisoning. My colleagues took one look at me and said I was off to the local medical centre. My boss drove me there and I was seen straight away and lucky enough to be examined by a doctor who suspected immediately what was going on.
They had me in an ambulance and we were off to hospital as soon as my husband came. They had called him in from a meeting he was having in the middle of the asparagus paddock with some of his staff. Here he was, in overalls and work boots! We talked the whole way to hospital, still not realising the urgency of the situation.


Arriving there it was all go. My blood pressure had dropped off the chart and the scan I had wasn’t conclusive so they were still not able to confirm we were pregnant until about 10 minutes before I went into surgery. The surgeon then explained exactly what was happening. The hard thing was, this was our first pregnancy but I hadn’t even known. Working back on dates later, my cycle was probably only 1-2 days overdue and I had put that delay down to all the rushing around we were doing with this funeral etc… so it was the most difficult thing to accept – joy at being told I was pregnant and sadness to know I no longer would be in a very short time.


After surgery of over three hours, we were told it had been an acute situation. The tube had ruptured right at the entrance to the womb and it was removed. I had haemorrhaged severely. It was only then that we realised how serious the situation was and what the alternative outcome could have been.
My poor husband had been the one to sit and worry the whole time so it was him I felt most for. I was a week in hospital and nearly six weeks recovering. The staff were amazing as was the surgeon who came and spoke to me a number of times afterwards. Looking back though it wasn’t then that I had needed help. Then it was like, OK this thing has happened lets get over it and on with it. How can you be worried about losing someone you really never had a chance to know anyhow?
God I was naive!


The care I had at home was fantastic, my mother, my husband’s mother and my husband. The first couple of weeks I was fine, but then it hit me. This overwhelming sense of loss, not only for the baby but for a piece of me that had been cut away. I felt like I had been cut in half as a woman. I needed a different kind of support then but no-one really understood and a later visit to my GP was no help, he hadn’t even bothered to read my notes prior to the appointment.
The saving grace was the local district nurse who visited me at home. She was the one who was able to talk me through the huge range of emotions. She came with me and my husband to our doctor’s visits and she was the one who put everything in perspective for us both. The change in my body was due to hormones, the operation, the reaction to anaesthetic (I lost all sense of concentration for weeks after) and dealing with my physical scares (I had nearly 30 staples down the centre of my abdomen) etc…


Time moves on and does heal. You go back to work, you go back to life, the physical scars look a bit better and emotionally you grow with it and through it. My husband and I are lucky to be able to talk to each other as we do, but we still both have our days. For me it was the about the time when our baby would have been born; my best friend was due a short time after too. Seeing her new baby boy helped me though. It was a great opportunity to cry with joy of new life and of those passed.
Lots of people have said to us “It’s OK I had a miscarriage. It’s the same sort of thing”. But ectopic pregnancies are different. They open up a whole different set of emotions. For me it’s the physicalness of it. It’s also the sense of knowing that it can happen again, especially for me when I never knew I was pregnant the first time. What if it does happen again and I lose the other tube? What if it happens again and I don’t survive? I also doubted myself – did I miss some sign somewhere, everyone else seems to get it right, what did I miss?


We now have a Dr. who wants to know about us physically & emotionally. “How’s it going?” is always his opening line and I have talked to him about this. He was great with my paranoia the first few months. I used to be petrified and convinced I was pregnant and rush in for a test. He also referred us on to a specialist a couple of months later so that some of our questions and concerns could be better answered and really put our minds at ease.


Some time later there was an article in a magazine about ectopic, very factual and brief, it got a whole one page. The following month they had a huge article (numerous pages) on miscarriages. Maybe it’s just that miscarriages are more common, I don’t know, but people need to understand that although both are possibly equally as frightening, painful and traumatic, the differences are all the additional emotional stress from the extra dimensions of; the guilt of being complicit in the decision allowing your own baby to die, the physical danger and longer recovery time, the possibility of never being able to have another baby, the warning about the potential for another ectopic and the realisation it could kill you.


You do grow through it though and you just learn to become more aware of your body and yourself. I have learned to trust and listen to my instinct a lot more.