What is an Ectopic Pregnancy?

While there are some risk factors, an ectopic pregnancy can happen to anyone. And, because it's potentially dangerous for you, it's important to recognize the early signs and get treatment as soon as possible. Occasionally, an ectopic pregnancy doesn't cause any noticeable symptoms and is only detected during routine pregnancy testing.
However, most women do have symptoms, and these usually become apparent between week 5 and week 14 of pregnancy.
They include:


What Causes and Ectopic Pregnancy?

After conception, the fertilized egg travels down one of the fallopian tubes on its way to the uterus. If the tube is damaged or blocked and fails to propel the egg toward the womb, the egg may become implanted in the tube and continue to develop there.

Because the vast majority of ectopic pregnancies occur in a fallopian tube, they're often called "tubal" pregnancies. Much less often, an egg implants in an ovary, in the cervix, directly in the abdomen, or even in a c-section scar. 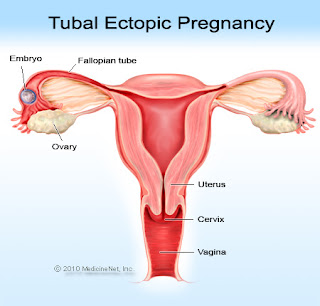 Treatment Options for an Ectopic Pregnancy

If the ectopic pregnancy is diagnosed before your fallopian tube ruptures, you have the following treatment options:
Surgery Options:

An ectopic pregnancy can be removed from a fallopian tube by using salpingostomy or salpingectomy.
Both salpingostomy and salpingectomy can be done either through a small incision using laparoscopy or through a larger open abdominal incision  called a laparotomy. Laparoscopy takes less time than laparotomy. And the hospital stay is shorter. But for an abdominal ectopic pregnancy or an emergency tubal ectopic removal, a laparotomy is usually required.