THE 8 STAGES OF THE TWO-WEEK WAIT 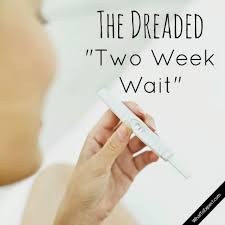 The dreaded two-week wait. Those of us in this game know it as the 2ww. Those awful days between your pregnancy attempt — whether that be a natural try at home or a medicated attempt at the fertility center — and the day you get your pregnancy test results.
There are a few things to know about the two-week wait, but the most important is: Time will never move more slowly in your entire life than it does here. There are a handful of “stages” of this time period that women go through, each one solidifying this waiting game as a time of utter insanity.

This is how we all go into the 2ww. Positive. Hopeful. But, and especially if it’s not your first one, you also know to keep your cool. It’ll be what it’ll be. There’s nothing more you can do at this point. It’s now in God’s or the Universe’s or anyone else’s hands but your own. You’ve done all you can do, so now you just wait. No big deal. This stage usually lasts the first day, or maybe a full 36 hours. But that’s it.

This stage usually begins on the second or third day. You just know that you’re little embaby (the loving term you now call a fertilized egg) has found its way into your uterus lining and is busy making its home there. You tell yourself and your partner that you really think you’re pregnant. And you desperately find pregnancy symptoms in your daily routine:
Oh my God, I farted! It must be the baby.
I had a dream last night (doesn’t matter about what). It must be the baby.
I just yawned. Wow, this first trimester exhaustion is serious!

After a few days of convincing yourself that you’re definitely, definitely pregnant, you begin to doubt that you are. You just don’t “feel” it. Of course, at this point it’s impossible to feel anything, but you know that if you were pregnant, you’d be one of those women who just knew. But you don’t feel anything, and so you must not be pregnant.

4. Google Is My BFF Stage

It’s probably only five, maybe six days, since your attempt and you can’t do a single thing in the world except Google everything. What’s the earliest you can take a pregnancy test? When does implantation occur? How soon after implantation can you get a positive pregnancy test? Earliest symptoms of pregnancy — no, not at six weeks, I want the symptoms for three weeks one day!Oh, there aren’t any. You read pages and pages of fertility boards from 2009, even though you know treatments are totally different now. You search for any woman who had a dream like you did with the color tourmaline in it during their 2ww and ended up being pregnant.

You realize all this Googling isn’t really helping, so you quit it. This lasts for an hour. Maybe two.

It’s way too early to get a positive response, but that one woman on the 2ww message board from 2011 got her first positive pregnancy test eight days into the wait, so if you’re pregnant, you will too. You don’t. But the test could be wrong. It’s too soon. No big deal. You shouldn’t have tested anyway. I mean, if you could find out sooner than the 2ww, the doctors would have you come in sooner. They are doctors, after all. That woman on the 2ww message board from 2011 was probably a lying troll anyway. You’ll never admit it, but later you dig the test out of the bathroom garbage to see if it changed. It didn’t.

7. Gloom and Self Pity Stage

At this stage, you’ve only got a few days left until your blood test. You’ve taken more than a handful of home pregnancy tests, maybe even bought them in bulk on Amazon. You wonder why you even bother. Why you put yourself through this. AGAIN. You think of ways to escape your reality. Maybe I should go live in a foreign country for a year doing something meaningful. Ugh, but it’s just all so unfair! Jill has FIVE kids and she doesn’t even appreciate motherhood. Really, who the heck has five kids these days? What’s wrong with me? What did I ever do to deserve this?

You walk into your blood test feeling 100% insane. The last two weeks have made you question everything about your mental state. You tell yourself, like you did that first day, that it’s (still) out of your hands. You also tell yourself that you’ll be okay no matter what the test reveals. But you won’t be. You didn’t get into this to get a negative. You want out of this cycle of insanity so badly. If that test is negative, you’ll relive these two weeks again. And each time will pluck more bits of yourself from you.
Culled from:https://www.babble.com/pregnancy/the-8-stages-of-the-two-week-wait/

BABY DUST to all of the MOTHERS IN WAITING....